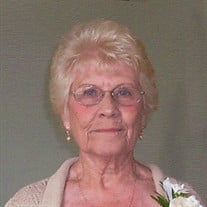 LORETTA W. “WILLIE” SOLLER Loretta W. “Willie” Soller, 80, of Great Bend, PA was reunited with her husband, James P. Soller, in heaven on September 11, 2019. Jim predeceased her February 2012. Willie is survived by her children, Deborah (Michael) Welch, Phillip (Kathryn) Soller, and Karen (Glen) Warner; 4 grandchildren, Melissa (Justin) Ross, Victor Welch, Tracy (Jim) Canfield, and Nicole Soller; 3 great grandchildren, Nicholas and Lauren Ross, and Sophia Canfield; a brother, Eugene (Sandy) Wright; sister-in-law, Phyllis Nerove; several nieces and nephews; and her beloved companion Terrier, Sissy. She was also predeceased by her sister, Vivian (Don) Garis. Prior to her retirement, Willie used her skills of organization for Dr. Hinkley’s Dental Practice. She served as President of the V.F.W. Post #6223 Auxiliary. Willie carried the Post Auxiliary flag, marching in parades. She and Jim saw the V.F.W. Post as a second home, serving people in our community. She sold Avon for many years. Willie was the best mom and grandma, you could dream of having. She took great pride in her family and she and Jim became role models by their consistent example. Willie joins Jim and our hearts deeply miss them both. A funeral service will be held at 11:00 a.m., Monday, September 16, 2019 at the Tuttle-Yeisley Funeral Home, Inc., Hallstead, PA. Interment will be made in Woodlawn Cemetery. Friends may call from 5-8 p.m. Sunday. In lieu of flowers, memorial contributions may take the form of a donation to the V.F.W. Post #6223 Auxiliary, 386 Main Street, Great Bend, PA 18821 or to Hospice of the Sacred Heart, 600 Baltimore Drive, Wilkes-Barre, PA 18702.

The family of Willie Loretta W. Soller created this Life Tributes page to make it easy to share your memories.

Send flowers to the Soller family.