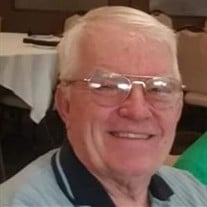 WILLIAM EDWARD MEAD William Edward Mead, 75, of Great Bend, PA passed away peacefully at his home on March 24, 2020. He was predeceased by his parents, Margaret and David Mead. He is survived by his loving wife of 53 years, Paulette (Mikolon) Mead; his daughters, Justine (John) Ord, Jenine (John) Dorunda, and Janelle (Ryan) Tench; his grandchildren, Zachary Ord and Natasha VanGorder, Bryce Dorunda, Madison Dorunda, Jonathon Dorunda, Delaney Tench, and Miles Tench; two sisters and a brother; three sisters-in-law; two brothers-in-law; and several nieces and nephews. Ed served in the US Air Force for four years before working at IBM for 32 years. He then worked for the Hallstead Post Office delivering mail for two years, prior to his retirement. He was a member of the Grace Lutheran Church, Hop Bottom, PA. Eddie was a lifelong member of the New Milford Rifle and Pistol Club, where he handed down his love of trap shooting to his son-in-law and grandson. He was an avid supporter of Blue Ridge athletics. He was very involved over the years with his daughters in softball and was a positive influence to many young athletes. Ed was truly happy on top of Rosie in SGL35, but that second only to his love and dedication to his family. He especially loved visits from his grandchildren and would greet them all with a clavicle grip and a hoot owl call. Eddie will be missed dearly by his family, friends, and hunting buddies, and his sense of humor will forever be remembered. “Eddie, Daddy, Grandpa, we will miss you dearly. We love you.” Due to the pandemic, a Celebration of His Life will be delayed. Inurnment will be made in New Milford Cemetery. Arrangements are under the direction of the Tuttle-Yeisley Funeral Home, Inc., Hallstead, PA. Memorial contributions may be made to Grace Lutheran Church, 351 Greenwood Street, Hop Bottom, PA 18824-7838.

WILLIAM EDWARD MEAD William Edward Mead, 75, of Great Bend, PA passed away peacefully at his home on March 24, 2020. He was predeceased by his parents, Margaret and David Mead. He is survived by his loving wife of 53 years, Paulette (Mikolon)... View Obituary & Service Information

The family of William Edward Mead created this Life Tributes page to make it easy to share your memories.

Send flowers to the Mead family.