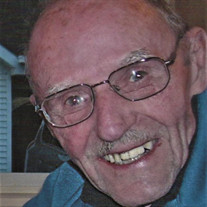 WALTER DAVID GALLOWAY Walter David Galloway, 96, of Great Bend Township, PA went home to be with the Lord on April 12, 2020. He was predeceased by his wife of 63 years, Evelyn Carvin Galloway; his sisters, Mary Galloway and Della Fuller; his brothers, Leonard and Lewis Galloway; and three sons-in-law, James B. Tanner, John Gilman, and Stephen Szwalla, who all loved him like a Father. Walter is survived by a son, Gary (Judy) Galloway; daughters, Sharon Gilman, Wendy (Stephen) Dodd, and Vicky (Walter) Welch; 11 grandchildren; 23 great-grandchildren; a much loved honorary daughter, Mary Tanner; and numerous nieces, nephews, and extended family members. Walter was a proud Veteran with service during World War II (1942-45) and the Korean Conflict (1951-53). During the Korean Conflict, he lived with his family in France. He was a Master Sargent in the Army Air Core. He flew 52 Missions in a B24 as a belly gunner. He was a graduate of Washington State University with a Degree in Business Management. He was a long time member of the First Baptist Church in Hallstead, PA. He retired from IBM, Endicott, NY, in 1983 after 30 years, where he worked as a Project Manager. His time with IBM offered him the opportunity to live in Japan and Singapore while completing assignments. Prior to that he was a Phone Company Lineman, and after retirement from IBM, he was a Great Bend Township Supervisor, a Real Estate Agent, and a member of the Susquehanna County Planning Commission. Walter was an accomplished skier, both snow & water. He taught many grandchildren how to drive a boat and ski at his cottages. He enjoyed playing golf, and was nick-named “Tiger Galloway”. He was a volunteer with Meals on Wheels for close to 20 years. In his later years, he loved playing Gin Rummy twice a week with Sharon and Stephen. Walter’s smile and the twinkle in his eye will be greatly missed. A Memorial service will be held at a later date. In lieu of flowers, donations may be made to the charity of your choice in his honor.

WALTER DAVID GALLOWAY Walter David Galloway, 96, of Great Bend Township, PA went home to be with the Lord on April 12, 2020. He was predeceased by his wife of 63 years, Evelyn Carvin Galloway; his sisters, Mary Galloway and Della Fuller; his... View Obituary & Service Information

The family of Walter David Galloway created this Life Tributes page to make it easy to share your memories.

Send flowers to the Galloway family.