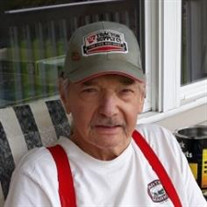 Walter “Butch” Spanko Butch Spanko left for the big hunting and fishing grounds from his home in Thompson, PA on March 21, 2021. Affectionately called: Butch, Fireball, Dad, Walt, Grandpa, and Uncle. Born on May 13, 1941 and resided in Metuchen, NJ and attended Metuchen High School, he was preceded in death by his parents, Walter and Cathering (Bognatz) Spanko, and a brother, Joseph. Butch’s career included multiple talents, but his main interest was in seafood. He was co-owner of Rasmussen Seafood and retired after 25 years. He then utilized his knowledge in the seafood business of Shoprite until his retirement in 2003. He was an active member of the Metuchen Elks 1914. He was also active in the SAL Squadron 65 at Fugle-Hummer American Legion. Upon moving to Pennsylvania, he became an active with the Susquehanna American Legion Post #86, especially with the Lenten Seafood Dinners. Butch is survived by his wife of 46 years, Janet; a daughter, Melanie and her companion John, NC; a son, Walter S. and wife Jacqueline, NJ; a grandson, Walter J.; his sisters, Susanne Gagnon, NJ and Katherine Kaysan, IN; and his much loved nieces and nephews. Butch was a lover of the Outdoors. He wanted you to know that he had a GOOD RIDE: from the MORRA games with friends, fishing, hunting, target practice, boating, swimming, while encouraging the next generation! Everyone knew that Butch was the one you could go to for anything! He will be missed! Arrangements are entrusted to the Tuttle-Yeisley Funeral Home, Inc., Hallstead, PA. At his request, there will be no public viewing.

The family of Walter "Butch" J. Spanko created this Life Tributes page to make it easy to share your memories.

Send flowers to the Spanko family.