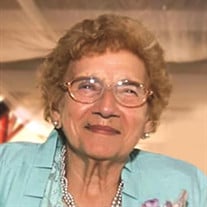 Rose Marie (Coccimigilo) Conigliaro, 93, was called home on the morning of Thursday, January 7, 2016. She was born in Scranton, PA on July 4, 1922. Rose moved to New Milford, PA in 1933 where she spent the remainder of her life surrounded by family and friends. Rose was preceded in death by her loving husband, Peter Albert Conigliaro; parents Anthony and Rose (Mendicino) Coccimigilo; six brothers; and one sister. Rose inspired the lives of countless with her spirituality, infinite kindness, wisdom, generosity, and love. She was best known as “Mom,” “Aunt Rose,” and “Grandma” to family and non-relatives alike. She and her late husband, Peter, owned and operated the Green Gables Restaurant for more than 50 years. A devout mother and Catholic, Rose was a parishioner of the former St. John's Church of New Milford (a mission church of St. Lawrence Roman Catholic Church), member of the Altar and Rosary Society and Church Choir, taught CCD classes, and acted as den mother for Boy Scouts. Rose enjoyed a life of love and laughter. Whether she was making sauce and meatballs, tending her garden, saying daily rosaries, painting, traveling, playing pinochle, crocheting, or playing with her grandchildren, Rose could always be found with a smile on her face. She was the picture of style and grace, doing everything with sophistication and love. She treasured many things, but most of all, the company she kept. Rose’s counsel will never fade and many will miss sitting at her kitchen table soaking in her words of wisdom. She reminded others to “accept people for who they are” and to “take care of each other.” She knew what was important in life and instilled those values in others through her words and her actions. When her sons were young, she spent Sundays teaching them to dance in their living room. As her family grew in numbers and age, she taught them the value of togetherness. Her tight-knit family is a testament of her love. Above all of her accomplishments and hobbies, Rose will be remembered as a mother--a mother of three sons and their spouses; a mother to her eight grandchildren; a mother to her four great-grandchildren; and a mother to her countless nieces, nephews, cousins, and friends. She is greatly admired and will be missed by all. Surviving are her sons Joseph (Diane) Conigliaro, Anthony (Diane Gathany) Conigliaro, and Peter (Carol) Conigliaro; her grandchildren Peter Raymond Conigliaro, Joseph (Bobbi Jo) Conigliaro, Nicholas (Danica) Conigliaro, Michael (Kelsey Toomey) Conigliaro, Dina (Cameron) Eigner, Maria (Jason) Traino, Annette (Darren) Adair, Christa (John Mullin) Conigliaro; great-grandchildren Cameron Franks, Peter Adair, Gianna Rose Traino, and Rose Adair and many nieces, nephews, and cousins. The family will greet friends from 2pm to 5pm on Sunday, January 10 at Tuttle-Yeisley Funeral Home in Hallstead. Mass of Christian Burial will be held at St. Lawrence Church, Great Bend on Monday, January 11 at 11am. The Conigliaro family would like to send a sincere thank you to all of the staff and doctors at Hospice of the Sacred Heart. God bless each and every one of you. In lieu of flowers, donations can be made on Rose’s behalf to St. Lawrence Church, 380 Franklin St., Great Bend, PA 18801 and Hospice of The Sacred Heart, 600 Baltimore Drive, Wilkes-Barre, PA 18702.

Rose Marie (Coccimigilo) Conigliaro, 93, was called home on the morning of Thursday, January 7, 2016. She was born in Scranton, PA on July 4, 1922. Rose moved to New Milford, PA in 1933 where she spent the remainder of her life surrounded by... View Obituary & Service Information

The family of Rose Marie Conigliaro created this Life Tributes page to make it easy to share your memories.

Rose Marie (Coccimigilo) Conigliaro, 93, was called home on the...

Send flowers to the Conigliaro family.