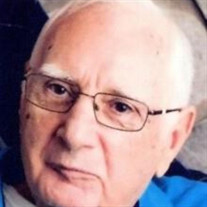 Roger A. Zurn, age 85, of York, formerly of Hallstead, Susquehanna County, died, December 30, 2020 at Misericordia Nursing and Rehabilitation Center in York. He was the husband of the late Trudy (Wilcox) Zurn. Born February 3, 1935, he was a son of the late Howard L. and Florence C. (Guild) Zurn. He served in the US Navy in active duty from 1955-1957, and as a Reservist for 26 years. He earned his Bachelor’s from Keystone Junior College, and was retired from IBM after 38 years of employment. He was a member of United Methodist Community Church in Great Bend, as well as the Hallstead Rod and Gun Club. He was a life member of the NRA, and had been a volunteer for Hallstead Ambulance. Mr. Zurn is survived a dear friend of 12 years, Holly Snitzer, of Harrisburg; four sons, David (Mary) Zurn, York, PA, Eric (Julie) Zurn, Hallstead, PA, Todd (Mary Lou) Zurn, Conklin, NY, and Greg Zurn, Wilkes Barre, PA; two daughters, Amy (Eric) Ariyoshi, Novato, CA, and Lisa Zurn, Great Bend, PA; 18 grandchildren; 13 great grandchildren; a brother, Jeffrey H. (Vicki) Zurn, Great Bend, PA; a brother-in-law, Dick Maney of Windsor, NY; 8 nieces and nephews. He was also preceded in death by a son, Alan S. Zurn; two grandchildren, Sydney Zurn and Brock Tierney; and a sister, Robin Maney. A memorial service will be held at 2:00 p.m., Saturday, May 15, 2021 in his church followed by military honors. Friends may call from 1-2 p.m., prior to the service in the church. Inurnment will be made in Rose Hill Cemetery, Hallstead, PA. In lieu of flowers, memorial contributions may be made to National Park Service Foundation 1500 K Street NW, Suite 700, Washington DC 20005.

Roger A. Zurn, age 85, of York, formerly of Hallstead, Susquehanna County, died, December 30, 2020 at Misericordia Nursing and Rehabilitation Center in York. He was the husband of the late Trudy (Wilcox) Zurn. Born February 3, 1935, he was... View Obituary & Service Information

The family of Roger A. Zurn created this Life Tributes page to make it easy to share your memories.

Roger A. Zurn, age 85, of York, formerly of Hallstead, Susquehanna...

Send flowers to the Zurn family.