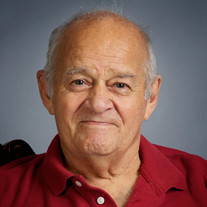 ROBERT J. WALKER Robert J. Walker, 88, of Hallstead, PA died peacefully in his home and was reunited with his wife, Harriett in heaven on November 7, 2014. Harriett predeceased him in August 2010, also by his daughter, Robin in 2005, his brother, Herbert Walker, and a great granddaughter, Alexandra Gray. Bob is survived by three daughters, Linda and Harold “Butch” Ross, Penny and Bob Carpenetti, and Gail and James Aldrich; eight grandchildren; 18 great grandchildren; two sisters, Grace Davidson and Joyce and Bill Donahue; brother-in-law and sisters-in-law, Carl and Janice Brown and Betty Walker; and several nieces and nephews. Bob was very civic minded and involved in the community. He was a charter member of the Hallstead Great Bend Lions Club, a life member of the Hallstead Fire Company and the Bluestone Lodge of the Masons, a member of the American Legion, Kalurah Shriners, and the First Presbyterian Church of Hallstead. He was active in the Boy Scouts of America, earning the Rank of Eagle Scout and later serving as a Scout Master. Bob and Harriett owned and operated a True Value Hardware Store in the Hallstead Plaza for many years. He enjoyed cutting wood, snowmobiling, hunting, and volunteering in the community. Bob loved spending time with his family and friends. A memorial service will be held on Monday, November 10, 2014 at 3:00 p.m. at the Tuttle-Yeisley Funeral Home, Inc., Hallstead, PA. Inurnment will be made in Rose Hill Cemetery at a later date. Friends may greet the family following the memorial service at the funeral home. Should friends so desire, expressions of sympathy may take the form of a donation to a local charity of your choice.

ROBERT J. WALKER Robert J. Walker, 88, of Hallstead, PA died peacefully in his home and was reunited with his wife, Harriett in heaven on November 7, 2014. Harriett predeceased him in August 2010, also by his daughter, Robin in 2005,... View Obituary & Service Information

The family of Robert J. Walker created this Life Tributes page to make it easy to share your memories.

Send flowers to the Walker family.