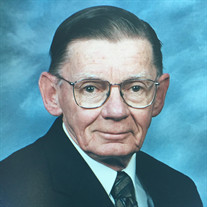 Robert S. Samson stepped into Glory at 12:00am on January 5, 2016. Bob, Dad, Grampy, or Uncle Bob, as he was lovingly known, was born on October 17,1929 in Kirkwood, NY to parents, Frank R. and Cora Mildred Cook Samson. As the youngest of seven children, Bob married Genevieve Sylvia Rome whom he called "Jeanie" on December 23,1950. He served as Corporal in the US Army from 1951 until 1953 during the Korean conflict. The couple was blessed with a daughter, Deborah Jean and son, Michael Robert; he loved being a father. Bob was a truck mechanic for Cook brothers, Binghamton, NY for over 30 years and was a faithful member of First Baptist Church, Hallstead, PA for more than 55 years. He served as a Deacon, Trustee, Youth Leader, and Sunday school teacher throughout the years. In his spare time, he exercised his creativity with mechanical projects, working on his own cars and doing whatever he set his mind to do. Mr. Samson adored his 5 grandsons, Matthew Robert (Laura) Samson, Benjamin Michael (Monica) Samson, Michael Joseph (Kirstin) Hamblin, Kurtis Richard (Laura) Samson, and Paul Brian Hamblin. "Grampy"was proud of his great grand children, Anna Mae, Elizabeth "Lizzy" Sue and Nolan James Samson, and Hannah Elizabeth and Rachel Olivia Hamblin. Surviving are his wife, Jean, daughter, Debbie (Jerry), daughter-in-law, Sue (Fred) Mullen, sister, Jean Katleski, all of his grandchildren, great-grandchildren children listed above, and many nieces and nephews who have fond memories of his sense of humor and love for Jesus Christ. He is predeceased by his brothers, Frank, Perry, Douglas, Reeve and sister, Dorothy, along with his son, Michael Robert. The family sincerely appreciates the compassionate care of Bob's loving caregivers who became like family at Fred and Harriet Taylor Health Center, Bath, NY where Bob spent his last days. He was "their Bob" and they were his special angels. Funeral services will be held at First Baptist Church, Pine Street, Hallstead, PA on Saturday, January 9, 2016 at 2:00pm. Calling hours will be at1:00pm, also at the church. Arrangements are being made by Tuttle-Yeisley Funeral Home in Hallstead, PA. Memorial contributions can be made to First Baptist Church, Hallstead, PA 18822.

Robert S. Samson stepped into Glory at 12:00am on January 5, 2016. Bob, Dad, Grampy, or Uncle Bob, as he was lovingly known, was born on October 17,1929 in Kirkwood, NY to parents, Frank R. and Cora Mildred Cook Samson. As the youngest of... View Obituary & Service Information

The family of Robert S. Samson created this Life Tributes page to make it easy to share your memories.

Send flowers to the Samson family.