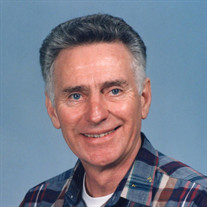 ROBERT “BOB” R. FAGAN Robert “Bob” R. Fagan, 77, of Hallstead, PA passed away at his home on March 31, 2021. He is the son of the late Alfred and Alice Fagan. Bob is survived by is wife, Julia (May) Fagan; sister, Laura Braun; sister-in-law, Thelma May; nephews, Tim (Andrea) Braun, Russell (Brenda) May, and Randy May; grand nephews, Daniel Braun, Michael Braun, and Collin (Rachel) May; and a great grand niece, Mackenzie May. Bob was a graduate of Susquehanna Community High School and a Veteran, serving with the United States Army in Germany as an MP. Upon retiring from IBM, Endicott, NY after 30 years of employment, Bob spent countless hours just having fun playing with all his toys (tractor, bulldozer, excavator, sawmill, etc.) He was a member of the American Legion Post #357, Hallstead, PA and attended Odgen Hillcrest United Methodist Church, Binghamton, NY He was a very generous man who enjoyed helping anyone that he could. Bob will be greatly missed by his family and friends. Per his request, there will be no public services. In lieu of flowers, any memorial contributions may be made to Pennsylvania Wounded Warriors, Inc. 1117 Country Club Road, Camp Hill, PA 17011.

The family of Robert "Bob" R. Fagan created this Life Tributes page to make it easy to share your memories.

Send flowers to the Fagan family.