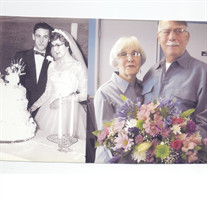 RICHARD W. “DICK” ROSENKRANS SR. Richard W. “Dick” Rosenkrans, Sr., 82, of Hallstead, PA was called home to be with the Lord on October 27, 2017. He was the son of the late Harvey and Anna Rosenkrans. He was predeceased by five brothers and three sisters. He is survived by his beloved wife of 61 years, Patricia (Pat), who cared for him through his illness. Dick is also survived by two children, Pastor Rick and Jeanette Rosenkrans, Brackney, PA and Patsy and John Oleniacz, Montrose, PA; four grandchildren, Jason and Jessica Rosenkrans, Hallstead, PA, Jeremy and Sara Rosenkrans, Charlotte, NC, Matthew and Megan Oleniacz, Brackney, PA, Alicia Crampton, Binghamton, NY; seven great grandchildren; two sisters, Esther Nelson, McDonough, NY and Helen Lawrence, Montrose, PA; and many nieces, nephews, and cousins. Dick worked at the Hallstead Foundry for 34 years and then retired after 12 years of employment with Montrose Hospital. Dick enjoyed motorcycling, horseshoes, archery, his camp in Mt. Valley, PA, being outdoors, and especially loved spending time with his cherished family. The family wishes to express their sincere appreciation to the doctors and staff that helped during his illness. A funeral service will be held at noon, Monday, October 30, 2017 at the Tuttle-Yeisley Funeral Home, Inc., Hallstead, PA. Interment will be made in the Franklin Hill Cemetery. Friends may call from 10 until the beginning of the service at the funeral home. In lieu of flowers, memorial contributions may be made to the Silver Lake Christian Community Church, Building Fund, 3043 John C. McNamara Drive, Brackney, PA 18812.

The family of Richard "Dick" W. Rosenkrans Sr. created this Life Tributes page to make it easy to share your memories.

Send flowers to the Rosenkrans family.