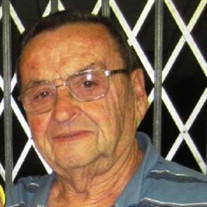 Richard Lloyd Allen, 87, of New Milford PA passed away December 29th, 2020 after spending the Christmas holiday surrounded by his loving family. Richard will be dearly missed by his loving wife of 68 years, Janet Allen; his four children, Jeanne(Donald) Button, Mark(Terri) Allen, Diane(Scott) Smith and Christopher(Jennifer) Allen; his eight grandchildren, Matthew(Kelly) Button, Jennifer(Andrew) Weller, Jordan(Janice) Smith, Daniel(Alexandra) Allen, Joshua Allen, Nicholas Smith, Samantha Allen and Michael Allen. Richard was also blessed with ten great grandchildren, Emma, Molly, Bennett, Brooklynn, Jameson, Marissa, Madelyn, Austin, Chloe, and Ryan. Predeceased by his parents Carmen “Stub” and Helen Allen; his brother, Jerry Allen; and sister, Ileen (Leon) Cook. He has been reunited with his best friend, Dave Hensel, who was the Frick to his Frack, spending their retirement working together with “Frick and Frack Construction.” Dick was born and raised on a farm in Harford, PA and graduated from Harford High School in 1951. In 1952, he married his devoted wife Janet on July 19th. Dick was a hard worker from the start. Working at Robinson’s Garage in Harford for over ten years before starting his own business, Allen’s Garage, in 1964. Soon after he opened Allen’s Radiator, the only radiator shop in the area at the time. He built his businesses from the ground up with the help of his sons Mark, Chris and son-in-law, Donnie. The garage is still in the family today owned by his son Chris. Besides being a mechanic, Dick was also a school bus driver, owned a stone quarry, car dealership, and was always working towards his next big adventure, often working from before the sun came up until after the sun went down. Besides fixing cars, he had many hobbies. He enjoyed traveling the country in his motorhome, visiting every State and Province in the United States and Canada. Anyone could count on him to fix what was broken or make an idea come to life. He spent countless hours woodworking, fishing and snowmobiling, to name a few. Dick spent the winters in his favorite place Okeechobee, Florida for over thirty years. He was the handyman for many years, along with his buddy Dave, in their Seminole Cove Community. Dick accomplished so much in his life but his greatest accomplishment was his family. Leaving behind not only the business, but the values of hard work and dedication. Though a man of few words, Dick had made an impact on each and every person he met; regardless if it was a helpful hand or his opinion, he was always there, no questions asked. He will be dearly missed. A private family goodbye will be held at the Tuttle-Yeisley Funeral Home, Inc., Hallstead, PA. Interment will be made in New Milford Cemetery on Saturday, January 2, 2021 at noon.

The family of Richard L. Allen created this Life Tributes page to make it easy to share your memories.

Send flowers to the Allen family.