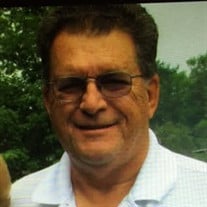 Paul Robert Bush (“Bushy”) – Today, it is with heavy hearts, that we say goodbye to Heaven’s newest Angel. No more pain and suffering for you Paul. In time our hearts will mend with all the wonderful memories you left behind. You will be forever missed and always remembered. Paul age 69, formerly of Owego, New York, was called to his heavenly home on Wednesday, August 26, 2015. He died at his home in Brighton, Colorado, from a battle with cancer. Paul was born on April 29, 1946 in Endicott, New York to Howard and Claire Bush. Paul grew up in Owego, New York, where he attended Owego Free Academy. He worked as a mechanic for a few years before entering the military. In 1968, Paul joined the U.S. Navy Seabees where he served two tours of duty in Vietnam. He was a proud U.S. Navy Seabee Vietnam Veteran. Later, Paul moved his family to Wilkes-Barre, Pennsylvania in 1973, where he continued working as a heavy equipment mechanic. In 1982, after losing their home in a devastating fire, the family relocated to southern California where he was employed at the city of Anaheim as a heavy equipment mechanic on fire trucks and then moved into management as the city’s fleet acquisition specialist. Upon retiring after nearly 30 years of service, they moved to Brighton, Colorado. He is survived by his wife of 48 years, Connie Hall Bush, and his children Constance Cole, Jeffrey Bush, Kymberlee Cochran, Mark Bush, Robert Bush, Bradley Bush, Joshua Bush, Shawn Bush, and Kaitlyn Bush, and his fourteen grandchildren, Joshua, Joseph, Victoria, Chandler, Ryan, Payton, Carter, Makenzie, Abigail, Drew, Jackson, Katie, Brent, and Caleb, and one great-granddaughter, Aidyn. He is also survived by his brother, Allen Bush of Dallas, Texas, and sister, Alice Judge of Owego, New York, and multiple nieces, nephews, cousins, and in-laws. Paul was preceded in death by his parents and also his brother Warren Bush. A Celebration of Life will be held for him with a viewing at 10:00 a.m., followed by an 11:00 a.m. funeral service at the Brushville Baptist Church, 4572 Brushville Road, Susquehanna, PA, on Friday, September 4, 2015. Arrangements are under the direction of the Tuttle-Yeisley Funeral Home, Inc., Hallstead, PA.

Paul Robert Bush (&#8220;Bushy&#8221;) &#8211; Today, it is with heavy hearts, that we say goodbye to Heaven&#8217;s newest Angel. No more pain and suffering for you Paul. In time our hearts will mend with all the wonderful memories you left... View Obituary & Service Information

The family of Paul R. Bush created this Life Tributes page to make it easy to share your memories.

Send flowers to the Bush family.