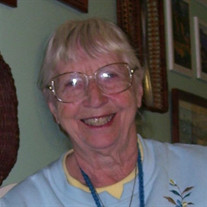 LENA JAYCOX GREEN PARKS Lena Jaycox Green Parks passed away peacefully on Thursday, September 27, 2018 at the age of 90. Born on November 10, 1927, she attended high school in Downsville, NY and earned a degree in Dietetics from Cobleskill College. She was a life member and Past Worthy Matron of Windsor Chapter 190, Order of the Eastern Star in Windsor, NY. She was a member of the American Legion Auxiliary Post 357, Hallstead, PA and a member of the Square Deal Riders Motorcycle Club in Harpersville, NY. Lena’s first love was dressmaking. She was a fine seamstress and made dresses for herself and her sisters that included her sisters’ wedding gowns. She also made racing leathers for her grandson Michael and others for motorcycle racing. She worked at the Triple Cities Dress Shop and at Kroehler Manufacturing Co. in Binghamton, NY where she learned the art of upholstery and later used this skill with great enjoyment to revive pieces of wonderful old furniture. After working in many Binghamton area restaurants, as a waitress and cook, she became the proprietor of the Chat & Chew Diner and Squealer BBQ in Conklin, NY. She served as dietary cook for Tressler Lutheran Home in PA. She did free-lance catering for many years and also created beautiful cakes for weddings, birthdays, and other special occasions. Lena loved music and after retirement she and her companion started a breakfast and funnel cake concession, traveling to many Bluegrass Festivals throughout NY and PA. With a CB handle “Butterfly,” Lena loved excitement, downhill skiing with her brother Clarence on one set of skis, snowmobiling, roller coasters, and motorcycling. She lived an exciting full life and was loved by all. Lena was predeceased by her loving mother and father, Alma and Robert Jaycox; brothers, Clarence and Ruth Jaycox, and Larry Jaycox; sister, Thelma Burlingame; brothers-in-law, Blake Jennings, Rubin Merrell, and Charles Burlingame; a devoted friend, John Puglisi; and her beloved aunt Betty Cowperthwaite Wood. Lena is survived by her son, Byron “Buz” and Karen Green; grandchildren, Michael and Kristin Green, Jennifer and Jamie Scott, and Jason Green; great grandchildren, Mackenzie and Skyler Lenhoff, Madison Roberts, Paul Roberts, Kaleb Scott, Rowan Scott, and Abby Scott; sisters, Irma Merrill and Fern Utter; sister-in-law, Bernece Jaycox; a special cousins, Arlene Merrell and Irene Lawson along with several other cousins, nieces, and nephews. A memorial service will be held at the Blatchley Sunshine Valley Wesleyan Church, Sunday, October 21, 2018 at 1:30 p.m. The family gratefully requests, in lieu of flowers, give to your favorite charity with thoughts of Lena.

LENA JAYCOX GREEN PARKS Lena Jaycox Green Parks passed away peacefully on Thursday, September 27, 2018 at the age of 90. Born on November 10, 1927, she attended high school in Downsville, NY and earned a degree in Dietetics from Cobleskill... View Obituary & Service Information

The family of Lena Jaycox Green Parks created this Life Tributes page to make it easy to share your memories.

Send flowers to the Parks family.