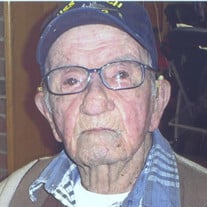 LAURENCE R. (LARRY) OSTERHOUT Laurence R. Osterhout, 96, of Hallstead, PA passed away peacefully on January 15, 2016 at Barnes-Kasson SNF. He was predeceased by his wife of 66 years, Sara Osterhout, a brother, Willis Roosa, and a sister, Jean Cushman. Larry is survived by his daughter, Donna and Don Comer, Hallstead, PA; a son, Albert (Butch) Osterhout, Hallstead, PA; four grandchildren, David and Lisa Comer, Daniel and Sandra Comer, William Osterhout, Christina Rex; nine great grandchildren; sisters, Joan Jones, Binghamton, NY, and Leah Wooster, Columbus, IN; and several nieces and nephews. Larry retired from Pennsylvania American Water. He was a proud Navy veteran serving on The USS Balch during WWII, the Asian Pacific Theatre, and the Korean Conflict. He was a lifetime member of the American Legion Post #357 and the V.F.W. Post #6223. When he returned from WWII he earned his private airplane pilot’s license along with a group of other WWII veterans in our area. Larry was a member of the Hallstead/Great Bend Rod and Gun Club, the New Milford Rifle and Pistol Club, and past master and member of the Bluestone Lodge for over 60 years. Larry loved to hunt, fish, and tend his vegetable and flower gardens. He took great pleasure in sharing fish and vegetables with his friends and family. He will be fondly remembered and greatly missed by all his family and friends. The family would like to thank all the staff at B-K SNF, including Dr. P. Patel, for their compassionate care. A funeral service will be held at the Tuttle-Yeisley Funeral Home, Inc., Hallstead, PA on Wednesday, January 20, 2016 at 6:00 p.m. with Pastor Dennis Dillman. Friends may call from 4-6 p.m. prior to the service. Spring interment will be made in Rose Hill Cemetery. In lieu of flowers, memorial contributions may be made to the First Presbyterian Church, P.O. Box 370, Hallstead, PA 18822.

LAURENCE R. (LARRY) OSTERHOUT Laurence R. Osterhout, 96, of Hallstead, PA passed away peacefully on January 15, 2016 at Barnes-Kasson SNF. He was predeceased by his wife of 66 years, Sara Osterhout, a brother, Willis Roosa, and a sister, Jean... View Obituary & Service Information

The family of Laurence R. Osterhout created this Life Tributes page to make it easy to share your memories.

Send flowers to the Osterhout family.