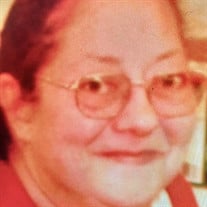 KATHRYN LOUISE THOMPSON Kathryn Louise Thompson, 57, of Johnson City, NY entered into rest on October 28, 2015 at her home. She was predeceased by her husband, Kenneth Thompson 2006, daughter, Amanda Hawthorne 2009, granddaughter, Autumn Hawthorne 2009, and her mother, Louise V. Casselbury. Kathryn is survived by her daughter, Brandy Osborne; sons-in-law, Michael Gee Sr. and Michael Hawthorne; five grandchildren, Jason Canfield Jr., Haley Gee, Michael Gee Jr., Alexis Hawthorne, and Abigail Hawthorne; her father, Ronald Osborne, Sr.; siblings, Thomas Osborne Sr., Ronald Osborne Jr., Susanne Osborne, Mark Osborne, Debbie Lee, Esther Heeman, Jonathan Osborne, and Paul Osborne; and numerous nieces and nephews. Kathryn enjoyed knitting and crocheting. She loved her grandchildren, they were the joy of her life. Kathryn had a heart for others and would help them any way she could. She loved her family dearly. A funeral service will be held on Monday, November 2, 2015 at 6:00 p.m. at the Tuttle-Yeisley Funeral Home, Inc. Private inurnment will be made at a later date in the Brookdale Cemetery. Friends may call from 4 until the service begins on Monday.

The family of Kathryn Louise Thompson created this Life Tributes page to make it easy to share your memories.

Send flowers to the Thompson family.