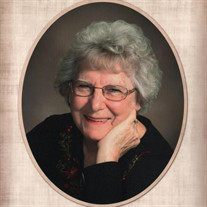 Jurrena T. Mitchell, 86, of Royse City, TX, formerly of Sebring, FL, passed into the presence of her Lord on December 24, 2020. Jurrena was born April 6, 1934 to Millard and Reka Transue. As a child she loved sports, music, skating and books. She graduated with a BRE from Baptist Bible Seminary in Johnson City, NY in 1956. Jurrena married James Mitchell in 1958 at Grace Baptist Church in Binghamton, NY where she was the Christian Education Director. They lived near Montrose, PA for 46 years. She was a beloved wife and joyful mother of five children. She worked part-time as a secretary, substitute teacher in the public school, and later served as a tax collector for their township for 20 years. She served the Lord faithfully through singing, choir directing, piano and organ playing, and children’s ministries at Bridgewater Baptist, Stanfordville Baptist, Five Mile Baptist in NY, and Maranatha Baptist in FL. She had a real gift for evangelism, asking people wherever she went if they knew Jesus, including the two young men that showed up when we called 911 at the beginning of her final illness. Jurrena was preceded in death by her parents, Millard Transue and Reka Transue Graham, her two sisters, Frances and Marilyn, and her brother, Lowell. She is survived by her husband, James Mitchell, five children - Jim (Janice) Mitchell of Preston, ID, Joan (Robert) Thomas of Morganton, NC, Joy (Keith) Neds of Royse City, TX, Jodi (Kevin) Mills of Pensacola, FL, and Jonathan (Melanie) Mitchell, of Florence, KY; 34 grandchildren, and 15 (soon to be 16) great-grandchildren. Arrangements are being made by Tuttle-Yeisley Funeral Home in Hallstead, PA. A memorial service will be held at the Stanfordville Baptist Church, 23456 SR 29, Hallstead, PA 18822. in Hallstead, PA On May 5, 2021 at 10:30 a.m. followed by the interment in Brookside Cemetery.

Jurrena T. Mitchell, 86, of Royse City, TX, formerly of Sebring, FL, passed into the presence of her Lord on December 24, 2020. Jurrena was born April 6, 1934 to Millard and Reka Transue. As a child she loved sports, music, skating and books.... View Obituary & Service Information

The family of Jurrena T. Mitchell created this Life Tributes page to make it easy to share your memories.

Send flowers to the Mitchell family.