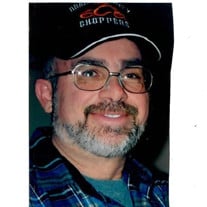 Jesse Naylor Jr., 72, entered into rest on February 23, 2022 with his loving family by his side. He is survived by his wife of 30 years, Kathleen; four children, Jesse Naylor III., Tammy (Brad) Jenner, Kim Collins (Jim), Tommy Collins Jr. (Kailey); six grandchildren; three great granddaughters; a brother, Rick (Lori); sisters, Rose (Mark), Arlene (Payje); a sister-in-law, Wendy; and several nieces and nephews. He was predeceased by his parents, Jesse and Irene Naylor; brothers-in-law, Nick and Richard (Helen); and a close friend, Tom Collins Sr. Jesse’s interest in trains lead him into his work with the D&H Railroad, which later became CP Rail, where he retired from in 2009. He also worked at Garys-U-Pull It for 12 years. Jesse admired wolves and their packs. He was an avid fan of his Dodge Dakotas and visiting Diners for breakfast with the guys. A funeral service will be held at 11:00 a.m., Tuesday, March 1, 2022 at the Tuttle-Yeisley Funeral Home, Inc., Hallstead, PA. Friends may call from 4-7 p.m., Monday February 28, 2022 at the funeral home. Should friends so desire, expressions of sympathy can take the form of a donation to St. Jude’s Children’s Research Hospital, 387 East South Street, Wilkes-Barre, PA 18702.

The family of Jesse Naylor Jr. created this Life Tributes page to make it easy to share your memories.

Send flowers to the Jr. family.