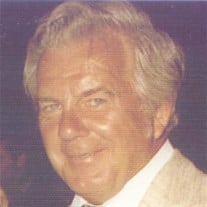 JAMES B. McCREARY James B. McCreary, 98, of Great Bend, PA went home to be with the Lord on December 31, 2015. He was predeceased by his wife of 75 years Kathleen Wheaton McCreary and a daughter, Joanne Wheaton Thomas. Jim is survived by his daughters, Sandra K. and Bill Llewellyn, Great Bend, PA and Tina McCreary, Montrose, PA; six grandchildren, W. James Llewellyn, Kathleen T. and Craig Purdum, Garth T. and Jennifer Llewellyn, Lisa Thomas and Pete Wofford, T.R. and Leslee Thomas, and Lloyd Thomas; great grandchildren, Casey Purdum, Jessie Purdum, Hunter Thomas, Morgan Thomas, Avery Rose Thomas, and Emma Wofford; a son-in-law, Haydn Thomas; and several nieces and nephews, including a special nephew, Bill and Lee Merrell. Jim was the owner of McCreary Insurance Agency. In 1973 he was awarded Merchants Insurance Group’s Milton L. Baier Mark of Excellence Award for the entire state of Pennsylvania. He was on the board of directors of both Davies Nitrate and County National Bank. Jim was a member of the Hallstead Presbyterian Church. He was a past Master and member of Bluestone Lodge for over 70 years. Jim was a member of Irem Temple Shrine, a 32nd degree. He was a charter member of Hallstead/Great Bend Rod and Gun Club. Jim enjoyed gardening. Nature and land conservation was very important to him. Jim was awarded a Citation from the Pennsylvania House of Representatives as the winner of the Pennsylvania Horticultural Society Award in the flower garden category for his 600 rose bushes for the exceptional quality of the plants. He was known as “The Rose Man.” Jim was also a golfer and hunter. Jim loved his family dearly and has had a lasting impact on all of them in a variety of ways. The family wishes to express their sincere appreciation to Hospice of the Sacred Heart, and personal care givers, Cher Buchta, Jonyca McKinney, Shannon Mess, Doreen Moat, and Betty Whitney for their compassionate care. A funeral service will be held at 1:00 p.m., Monday, January 4, 2016 at the Tuttle-Yeisley Funeral Home, Inc., Hallstead, PA. Interment will be made in Rose Hill Cemetery. Friends may call from noon until the start of the service at the funeral home. Memorial contributions may be made to the First Presbyterian Church, P.O. Box 370, Hallstead, PA 18822.

JAMES B. McCREARY James B. McCreary, 98, of Great Bend, PA went home to be with the Lord on December 31, 2015. He was predeceased by his wife of 75 years Kathleen Wheaton McCreary and a daughter, Joanne Wheaton Thomas. Jim is survived by... View Obituary & Service Information

The family of James B. McCreary created this Life Tributes page to make it easy to share your memories.

Send flowers to the McCreary family.