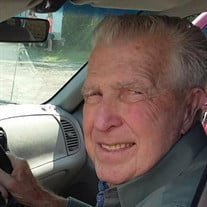 Jack L. McKeeby, 81, of Montrose, PA was promoted to glory on April 9, 2019 and reunited with his first wife, Alberta; second wife, Norma; grandson, Jordan Ralston; his step son, Lloyd Donald Welch; his brother, Robert; and sister, Fran. He is survived by his third wife, Linda Knell McKeeby; his daughters, Candi Barnard and Rick, and Rhonda Ralston and Derek; step children, Bonnie Brigham, Debra Fitch, Larry Welch and Lorraine, Joel Welch and Sandra, John Welch and Bobbi Jo; 30 grandchildren; numerous great grandchildren; several great great grandchildren; and numerous nieces and nephews. Jack was a self employed quarry man and a director of the Blue Stone Association. He had numerous other jobs over the years, including owning a gas station and working on the installation of 81 from the state line to Five Mile Point. Jack served as a deacon at the Elkdale Baptist Church of West Clifford, PA. His faith was very important to him and he truly lived it out. Jack’s life verse is John 14:6 Jesus saith unto him, “I am the way the truth and life: no man cometh unto the Father, but by me.” At Jack’s insistence, his body will be donated to SUNY Upstate Medical University, as a parting gift for the advancement of medicine for the future benefit of others. The family will hold a private memorial service at their convenience at his church. Memorial contributions in his memory may be made to the Jordan Ralston Scholarship Fund, c/o NBT Bank, 841 Main Street, New Milford, PA 18834.

The family of Jack L. McKeeby created this Life Tributes page to make it easy to share your memories.

Send flowers to the McKeeby family.