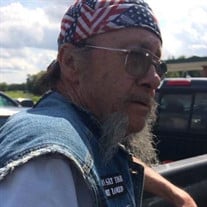 IVAN G. SMITH Ivan G. Smith, 69, of New Milford, PA entered into rest on September 7, 2017. He is survived by his loving wife of 44 years, Sandra. Ivan is also survived by daughter, Dawn Smith Hine; sons, Ivan Smith Jr.,and William Smith; 9 grandchildren; brothers, Clifford, Ernie, and Vernon; sisters, Jessie and Rose; brother-in-law, Ralph Stone; sister-in-law Mary and Tom Ferro; great friends, Eddie Lyman and Hank Peck; and many extended family members. Ivan was a Vietnam Veteran, serving as a Marine. He was a past officer of the American Legion Post #357. Ivan was an avid hunter, fisherman, and beer drinker, and not always in that order. He loves his Harley and enjoyed riding with his “brothers” in the Bad Dogs. He will be missed by all who knew him. Ivan will always be remembered for his jokes and funny quips, always with a smile and something off color to say. Ivan was a great husband, father, and friend. “You will never be forgotten.” A time of sharing will be held at 7:00 p.m., Monday, September 11, 2017 at the Tuttle-Yeisley Funeral Home, Inc. Hallstead, PA. Friends may call from 3-7 p.m., prior to the service. Private inurnment will be made in Ararat Cemetery at a later date. In lieu of flowers, memorial contributions may be made to Penny Aldrich, BAD DOGS treasurer, P.O. Box 642, Hallstead, PA 18822.

The family of Ivan G. Smith Sr. created this Life Tributes page to make it easy to share your memories.

Send flowers to the Smith family.