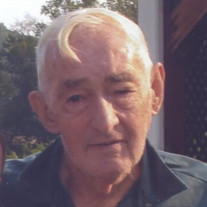 IRVING “IRV” C. IRELAND Irving “Irv” C. Ireland, 89, formerly of Liberty Township, PA was called home to be with the Lord on June 13, 2014. He was born to the late Walter and Mary Ireland in 1924. Irving is survived by one daughter, J. Roxie Ireland, Binghamton, NY; a sister, Oleita Travis, Brookdale, PA; three grandchildren, Kari L. and Jason Dickerson, Kelli L. Ireland, and Kyle M. and Kimberly Ireland; a great grandson, Jason Michael Dickerson; and several nieces and nephews. He was predeceased by his first wife, Marian Chilson Ireland in 1990, his second wife, Eleanor Winkleblech Ireland in 1996, and his third wife, Beatrice Lohss Ireland in 2013, a daughter, Barbara A. Ireland in 1984, and a son, Roger E. Ireland in 2007. Irving began his career as a self employed dairy farmer in Stanfordville, PA while also working at Agway, Binghamton, NY. After selling his farm, he worked for ten years and retired from Frito Lay, Binghamton, NY. During his retirement, Irving lived in Kissimmee, FL and Easley, SC. He enjoyed camping in his RV, traveling, gardening, tending his multiple bird feeders, and working in his workshop. He frequented Blue Grass Festivals and enjoyed Gospel and Country music. Irving will be lovingly remembered by his daughter, grandchildren, and sister. Relatives and friends are respectfully invited to attend his memorial service at the Tuttle-Yeisley Funeral Home, Inc., Hallstead, PA on July 12, 2014 at 2:00 p.m. with Pastor Philip Hunt officiating. The family will receive friends from 1 p.m. until the time of the service at the funeral home. If desired, memorial contributions may be sent in Irving’s memory to Susquehanna County Home Delivered Meal Program, c/o BSST Area Agency on Aging at 220 Main Street, Unit 2, Towanda, PA 18848.

The family of Irving C. Ireland created this Life Tributes page to make it easy to share your memories.

Send flowers to the Ireland family.