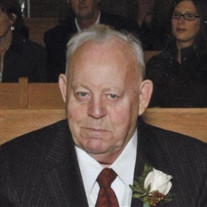 HERMAN LEO “MIKE” JENNINGS Herman Leo “Mike” Jennings, 82 of Peckville, PA and formerly of New Milford, PA entered into rest on January 4, 2019 and reunited with his wife of almost 40 years and the love of his life, Delores, who predeceased him in 2010. He was predeceased by his parents, Hugh and Margaret Whitney Jennings. Mike is survive by his children, Mark, Carl, and Rosemarie Jennings; a brother, Raymond and Betty Jennings; sister-in-law, Connie Vitaletti; many nieces and nephews, including Ann Marie Long, Marisa Blank, and Mary Ann Wedlock; and several great nieces and great nephews. The family wishes to express their sincere appreciation to Dr. Kareha, Dr. Pancholy, and Julie Oja PAC. Mike worked for PennDOT and was a skilled equipment operator. He was a member of Columbia Hose Company for many years. He was an avid NASCAR fan, enjoyed his coffee, and cutting grass with his riding lawn mower. Mike was a quiet man who would help anyone. He will be sorely missed by all who knew him. A prayer service will be held at noon, on Tuesday, January 8, 2019 at the Tuttle-Yeisley Funeral Home, Inc. Interment will be made in New Milford Cemetery. Friends may call from 11-12, prior to the service. Memorial contributions in his memory may be made to Columbia Hose Company No. 1, P.O. Box 599, New Milford, PA 18834.

The family of Herman "Mike" Leo Jennings created this Life Tributes page to make it easy to share your memories.

Send flowers to the Jennings family.