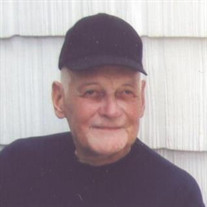 Henry L. “Hank” Runge of Kirkwood, NY had a divine appointment with Jesus Christ that he kept on December 5, 2016. He was the son of the late Harry and Betty Runge. He is survived by one sister, Eleanor and Byron Moore; his nieces and nephews, Debbie and Bob Menta, Tim and Rita Moore, Beth and John Smey, Karen and John Pichura; and several great nieces and great nephews; along with a special family at Jody’s Diner on Upper Court Street in Binghamton, NY. Hank's love and compassion shown brightly as he dedicated 10 years of his life helping his sister, Eleanor, raise her children. The lessons he taught them can't be measured in dollars and cents but, by integrity, hard work, loving those around them and most importantly keeping God first in their lives. He was dedicated to serving the Lord, Jesus Christ. He blessed others through his missionary contributions around the world and here in his hometown, often times picking up a stranger and feeding them then leaving them with a full belly and a few bucks in their pocket. Hank was a U.S. Army veteran serving during the Korean Conflict from 1953 till his Honorable discharge in March of 1961. He will be remembered for spending many hours at the Oxford Veterans Home visiting and offering comfort to the residents. A funeral service will be held on Friday December 9, 2016 at 11:00 A.M. at the Tuttle-Yeisley Funeral Home, Inc. 25 Susquehanna Ave, Hallstead, PA. Calling hours will be Thursday 4-7 P.M. Interment will be made in the spring at the Riverside Cemetery, Kirkwood, NY. In lieu of flowers charitable contributions can be made in his remembrance to the Pennsylvania Wounded Warriors Inc., 1117 Country Club Rd., Camp Hill, PA. 17011, or the Windsor Free Methodist Church, Kenya Well Project, PO Box 467, Windsor, NY 13865.

Henry L. &#8220;Hank&#8221; Runge of Kirkwood, NY had a divine appointment with Jesus Christ that he kept on December 5, 2016. He was the son of the late Harry and Betty Runge. He is survived by one sister, Eleanor and Byron Moore; his... View Obituary & Service Information

The family of Henry L. Runge created this Life Tributes page to make it easy to share your memories.

Send flowers to the Runge family.