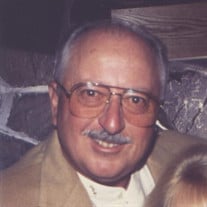 GORDON E. WILLIAMS JR. Gordon E. Williams, Jr., 73, of Hallstead, PA entered into rest on June 10, 2016. He is survived by his wife of 52 years, Linda. Gordon is also survived by his daughter, Lisa Brown and spouse Shawn Morris; two grandchildren, Heather and Jordan Rosa and Christopher Brown and fiancée, Stephanie Fisher; a brother, Gary; a brother-in-law, Gary and Susan Fallon; a sister-in-law, Diane and Bob Burchell; and several nieces and nephews. Gordon was self employed as a flag stone dealer. He enjoyed being outside, golfing, mowing lawn, traveling, and horseback riding. He could be found at McDonalds with his breakfast club. Gordon served as the President of Rose Hill Cemetery Association. He was a traditional family man, his grandchildren were dear to his heart and kept him young. A funeral service will be held at 12:00 p.m., on Tuesday, June 21, 2016 at the Tuttle-Yeisley Funeral Home, Inc., Hallstead, PA. Interment will be made in Rose Hill Cemetery. Friends may call on Tuesday morning from 9:00 a.m. until the beginning of the service. In lieu of flowers, memorial contributions may take the form of a donation to Rose Hill Cemetery Association, P.O. Box 814, Hallstead, PA 18822.

The family of Gordon E. Williams, Jr. created this Life Tributes page to make it easy to share your memories.

Send flowers to the Williams family.