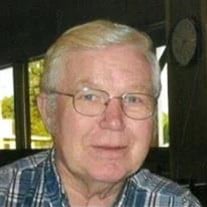 Gerald (Jerry) Hall, age 82, took flight to his heavenly home on January 8, 2019. As a man of deep faith, he leaves a legacy of service to his Lord Jesus Christ. For I am confident of this very thing, that He who began a good work in you will perfect it until the day of Christ Jesus. Philippians 1:6; Holding fast the word of life, so that in the day of Christ I will have reason to glory because I did not run in vain nor toil in vain. Philippians 2:16 Gerald Oliver Hall was born to Rexford Floyd Hall and Wanda Pearl Wheeler Hall on March 18, 1936, in Brushville, Pennsylvania. He was a 1953 graduate of Susquehanna High School, Susquehanna, Pennsylvania. Gerald met the love of his life, Doris Elaine Sherk, at the wedding of his older brother, Donald, and Doris’ lifelong friend, Betty Lynn Gay, in 1954, in Mishawaka, Indiana. Jerry and Doris were married in the Grace Bible Chapel, Mishawaka, Indiana, on May 14, 1955. Gerald’s love for the Lord and his life of servant leadership were lived out through his many passions – his family, photography, volunteer fire service, music and all things aviation. At the age of 35, Jerry and Doris followed the Lord’s call to study at the collegiate level at LeTourneau College in Longview, Texas, where he earned a Certificate in Aviation Maintenance and obtained the Airframe & Powerplant (A&P) license. Years later, he returned to LeTourneau University and earned the Associate of Science degree in Aviation Maintenance Technology. Soon after graduation in 1970, Jerry entered the workforce as an A&P mechanic at the Pontiac, Michigan, airport. Jerry and Doris and their young family returned to Longview in 1971 after which they made East Texas their lifelong home. Jerry worked for nearly 20 years at Marathon LeTourneau in Longview as a draftsman and company photographer. It was during these years that he transitioned from the drawing board to the autoCAD system of which he later provided his autoCAD expertise at Charles Frith Architect’s office and General Dynamics in Kilgore, Texas. Gerald also had a love for serving his community in both Indiana and East Texas through the volunteer fire department. He gave sacrificially for over 25 years serving in the capacity of Firefighter/Fire Marshall of the Liberty City Volunteer Fire Department. During this time, he could use his photography skills to document fire damage in which his photos were sought after and utilized by insurance companies, local media, and official documentation for historical archives. Gerald was a faithful member of the Pine Crest Bible Church in Longview, Texas, for over 50 years. He served in various leadership roles including Deacon, Elder, and as the Commander of the Awana program (children and youth ministry). His lifelong love for music was demonstrated through his accomplishments as a pianist, organist, choir director, quartet member, and worship leader in the church, where he gave of his time and talents willingly and sacrificially. Cherishing the memories of our Dad are daughter and son-in-law, Janice and Ray Laurent, Panola, Texas; daughter, Dr. Delinda Hall, of Longview, Texas; and son and daughter-in-law, Dwight and Angela Hall, Longview, Texas. His brothers, Dr. Donald Hall, Sebring, Florida, and David and Geraldine Hall, Susquehanna, Pennsylvania, also survive him. Doris’ family, Pat Weaver, Nappanee, Indiana; Jerry (Carol) Sherk, Gladewater, Texas; Sandra Edwards, Marsha (Uri) Castillo, South Bend, Indiana; and Tom (Eileen) Sherk, Bremen, Indiana will always love and remember Jerry Hall as their beloved big brother and life-long mentor. Gerald is survived by his grandchildren, Monica (Chris) Chmiel, Longview, Texas; Ray “Trey” (Jennifer) Laurent, Texarkana, Arkansas; Lauren (Doyle) Laurent-Parker, Savannah (Brandon) Henderson, Panola, Texas; Drs. Jacob (Kelly) Hall, San Antonio, Texas; Sarah (Jack) Buttram, Jesse Hall, and Wendi (Jake) Medley, Longview, Texas. He was blessed with a host of great-grandchildren, Melody (Justin), Tyler, and Kyle Chmiel, Elijah, Ethan, Jeremiah, Awesome Laurent, Cain Parker, Kaden, Sophia, Lillian, Bella, and Bentley Henderson, Lindsey and Kaitlyn Hall, and Henry and Lucienne Buttram, and one great, great grandchild, Rylan Pennington. He is also survived by many nephews, nieces, cousins, and a host of friends who were always welcomed with open arms in his home. Gerald is preceded in death by his wife of 62 years, Doris Sherk Hall, his parents, Rexford and Wanda Hall, step-mother Margorie Ketchum Hall, and sister-in-law, Betty Hall. The family extends many thanks to the ongoing care and love demonstrated by Gerald’s many caregivers throughout his time of residence at the Panola Nursing & Rehabilitation in Carthage, Texas and special friends from the Circle M Café. In lieu of flowers, memorial gifts can be made to Heartsway Hospice of Northeast Texas. A memorial service will be held at 11:00 a.m., Saturday, January 12, 2019 at the Hawthorn Funeral Home Chapel in Carthage, Texas. Internment and graveside services will occur in the spring at Maple Ridge Cemetery, near Susquehanna, Pennsylvania. Arrangements are under the direction of Hawthorn Funeral Home, Carthage, Texas and Tuttle-Yeisley Funeral Home, Hallstead, Pennsylvania.

Gerald (Jerry) Hall, age 82, took flight to his heavenly home on January 8, 2019. As a man of deep faith, he leaves a legacy of service to his Lord Jesus Christ. For I am confident of this very thing, that He who began a good work in you will... View Obituary & Service Information

The family of Gerald O. Hall created this Life Tributes page to make it easy to share your memories.