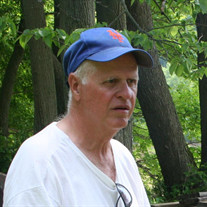 George W. (Bill) Burdick III of Oakland, PA passed away suddenly and peacefully at Barnes-Kasson Hospital on August 10, 2016. George was 67 years old and is predeceased in death by his father George in 2008 and mother Joyce (Perry) Burdick in 2007 also from Oakland, PA. George is survived by his sister J. Marie and her husband Laren Curtis, Oakland, PA, brother Jon Charles Burdick, Oakland, PA, brother Kevin P. and his wife Anita Burdick, Hillcrest, NY, sister Connie and her husband Craig Gordon, Littlestown, PA. Also surviving are many nephews and nieces. George graduated from the Susquehanna Community High School, Class of 1966 and immediately enrolled in Broome Community College where he obtained is A.A.S. degree as a Mechanical Engineer. Upon graduation from BCC, he obtained immediate employment at Carrier Air Conditioning Corp. in Syracuse, NY where he lived and worked for over 35 years becoming a valued employee while receiving many accolades and awards for his dedication and professionalism to that company. After retirement he returned to his family home in Oakland where he has resided for the last 6 years. George was an avid fan of anything pertaining to Syracuse University sports and the NY Giants football team. He enjoyed boating, golfing, skiing and NASCAR racing. We could always count on him to be by the fire at our family camp flipping the burgers and hotdogs. He was a great horseshoe player also. The family would like to thank the Ambulance Crew, the ER staff, the CNA’s, nurses and doctors on both the Second Floor Med-Surg unit and the Skilled Nursing Facility at Barnes-Kasson Hospital during his brief stay there. We can’t say thank you enough for your professionalism and dedication to our brothers care that you provided for him during his stay. George’s wishes were for private funeral arrangements with Tuttle-Yeisley Funeral Home, Hallstead, PA and interment is at the Woodlawn Cemetery, Great Bend, PA. A big thank you also to the Tuttle-Yeisley funeral home for expediting George’s funeral arrangements and making this as easy as possible during this time of family grieving.

George W. (Bill) Burdick III of Oakland, PA passed away suddenly and peacefully at Barnes-Kasson Hospital on August 10, 2016. George was 67 years old and is predeceased in death by his father George in 2008 and mother Joyce (Perry) Burdick in... View Obituary & Service Information

The family of George W. Burdick III created this Life Tributes page to make it easy to share your memories.

Send flowers to the Burdick family.