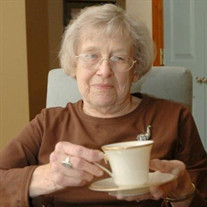 FRANCES E. DAVIS Frances Davis of Dallas, PA passed away at her home on May 2, 2017 just days shy of her 98th birthday. Frances was born in 1919 in Benton Township. She was the daughter of the late Edwin and Ethel Pedrick Evans. She was raised in Gibson, PA, where her parents owned the local General Store. Her early schooling was in a one room school house. She went on to graduate from New Milford Consolidated High School in 1937 and Keystone Junior College in 1939. In 1947 she married the late Rodney Davis. Together for 52 years, they operated Davis Dry Cleaners for twenty-two years. Frances also worked as a medical secretary for several local doctors. After the death of her husband in 1999, Frances moved to Dallas, PA. She was a member of Trinity Presbyterian Church. In addition to her parents and husband, Frances is preceded in death by aunts, Rhoda and Esther Pedrick and sisters, Mildred Lewis and Kathryn Evans. She is survived by her daughters, Diane Adams and Janet Carey (Dr. John). She has four grandchildren, Tim Adams (Jessica), Andrew Adams (Naomi), Morgan Park (Rick), and Dr. Devin Carey. She has six great grandchildren. She is also survived by a brother, Harold Evans, a nephew, Jeffrey Lewis (Susanne), and a niece, Gail Klimek. The family wishes to extend a sincere thank you to the people at the Hospice of the Sacred Heart. Your care and compassion helped to ease us through a difficult time. Special recognition goes to Dr. John Carey, her son-in-law. Mom loved you as a son. Thank you for returning that love as shown in the special care you provided. A very special thank you also goes to Dr. Devin Carey, her granddaughter, for the care of her grandmother. Frances was a firm believer in the goodness of random acts of kindness. It is her wish that we busy ourselves by doing good deeds for others in need of a kind touch or a helping hand. There will be no public service. A family celebration of her life will be entrusted to the Tuttle-Yeisley Funeral Home, Hallstead, PA. Burial will be at the Rose Hill Cemetery in Hallstead. “Miss me a little but not too long And not with your hearts bowed low Remember the love that we once shared Miss me but let me go.”

FRANCES E. DAVIS Frances Davis of Dallas, PA passed away at her home on May 2, 2017 just days shy of her 98th birthday. Frances was born in 1919 in Benton Township. She was the daughter of the late Edwin and Ethel Pedrick Evans. She was... View Obituary & Service Information

The family of Frances Davis created this Life Tributes page to make it easy to share your memories.

Send flowers to the Davis family.