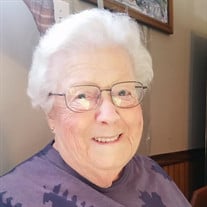 EVELYN R. WOOLBAUGH Evelyn R. Woolbaugh, 88, of Hallstead, PA passed away August 20, 2018 at Barnes-Kasson Skilled Nursing Facility. She was the daughter of the late Harry S. and Jennie (Decker) Kunsman, Sr. She was predeceased by her husband of 58 years, Walter G. Woolbaugh in 2009. She was also predeceased by an infant son, Roger; three brothers, Frederick Kunsman, Harry S. Kunsman Jr., and Raymond Kunsman; four sisters, Jane Florence, Clara Dearborn, Florence (Sparky) Burton, and Mary Tuttle. Evelyn is survived by her three sons and a daughter, Steve (Karen) Woolbaugh, Gordie (Judy) Woolbaugh, Joe (Laura) Woolbaugh, and Dorothy (Jon) Dribnack; six grandchildren; four great grandchildren; a sister-in-law, Lois Woolbaugh; and many nieces and nephews. Evelyn was a Eucharistic Minister for St. Lawrence Catholic Church in Great Bend, PA for more than 30 years. She was a teacher’s aide for 12 years at the Hallstead Elementary School. She was a long time member and a past President of the American Legion Auxiliary, Post #357 and played Santa Clause for the Legion for 22 years. She was a member of the V.F.W. Auxiliary Post #6223 for over 25 years, serving as Chaplin for several years, and really enjoyed working their Chicken and Biscuit Dinners. Most important to Evelyn was spending time with her family and friends. She loved singing and dancing to all kinds of music. For over 60 years, she enjoyed an annual vacation in Canada with her family. She was a devoted wife, mother, grandmother, great grandmother, and sister, who will be dearly missed. The family would like to extend a special thank you to Dr. B. Patel, the Barnes-Kasson SNF Staff, and the Hospital Staff for the wonderful and compassionate care given to our mother. A Mass of Christian Burial will be held at 11:00 a.m. at St. Lawrence Catholic Church, Great Bend, PA on Saturday, August 25, 2018 with the interment in St. Lawrence Cemetery. Friends may call from 5-8 p.m. Friday at the Tuttle-Yeisley Funeral Home, Inc., Hallstead, PA. Should friends so desire, expressions of sympathy may take the form of a donation to the American Legion Auxiliary, P.O. Box 429, Hallstead, PA 18822 , the V.F.W. Auxiliary, 386 Main Street, Great Bend, PA 18821, or to the St. Lawrence Catholic Church, 380 Franklin Street, Great Bend, PA 18821.

EVELYN R. WOOLBAUGH Evelyn R. Woolbaugh, 88, of Hallstead, PA passed away August 20, 2018 at Barnes-Kasson Skilled Nursing Facility. She was the daughter of the late Harry S. and Jennie (Decker) Kunsman, Sr. She was predeceased by her husband... View Obituary & Service Information

The family of Evelyn R. Woolbaugh created this Life Tributes page to make it easy to share your memories.

Send flowers to the Woolbaugh family.