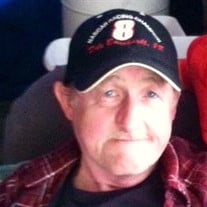 Ernest L. Slater, II, 68, of Hallstead, PA entered into rest on July 27, 2016 with his family by his side. He was the son of the late Ernest I. and Marion (Flint) Slater. Ernie was also predeceased by two sons Ernest III and Tony; a brother,... View Obituary & Service Information

The family of Ernest L. Slater, II created this Life Tributes page to make it easy to share your memories.

Send flowers to the Slater family.