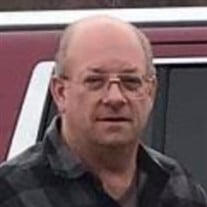 Ernest W. “Ben” Benjamin, III, 67, of Hallstead, PA was called home to be with the Lord on November 8, 2021. He leaves behind his beloved wife of 48 years, Margo; also his children, Myndi (Doug) Burgess, Shane Benjamin, and Hope (Jeremy) Perry; ten grandchildren, Gabi, Nick, Halona, Dorian, Jeremy, Tray, Alexander, Nathaniel, Elijah, and Jonathan; two great grandchildren, Audrey and Jethro; sisters, Paula (Wayne) Basa, Jan (Jim) Kasten, and Alice (John) Cooper; and many nieces, nephews, and extended family members. He was predeceased by his parents, Ernest Jr. and Ruth Benjamin. Ben graduated from Blue Ridge High School in 1972. He served with the United States Army from 1978-1987 with the 82nd Airborne. Following his time in the military, he became self employed as the owner/operator of Benjamin Trucking/Landstar Ranger. He served his local community with Great Bend Hose Company #1 and a life member of the American Legion Post #357. He enjoyed antique cars. He was known for his family BBQs, fireworks, and his larger than life personality. His greatest joy in life was spending time with his family and friends. He had devoted faith in Jesus Christ, and shared his beliefs with others he met throughout life. He was a member of Silver Lake Christian Church. A funeral service will be held at 3:00 p.m., Wednesday, November 10, 2021 at the Tuttle-Yeisley Funeral Home, Inc., Hallstead, PA. Interment will be made in Rose Hill Cemetery. Friends may call from 4-7 p.m., Tuesday and from 1-3 on Wednesday, prior to the service. Should friends so desire, expressions of sympathy may take the form of a donation to Great Bend Hose Company #1, 54 Tannery Street, Great Bend, PA 18821 or to Silver Lake Christian Community Church, 3043 John C. McNamara Drive, Brackney, PA 18812.

The family of Ernest "Ben" W. Benjamin III. created this Life Tributes page to make it easy to share your memories.

Send flowers to the Benjamin family.