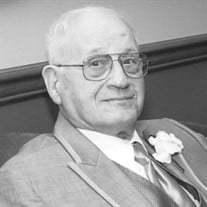 ELTON “SKIP” TYLER Elton “Skip” Tyler, 88, of Hallstead, PA was reunited with his wife in Heaven on October 15, 2019. Tregertha predeceased him in 2015 after 63 years of marriage. He was also predeceased by a granddaughter, Brooke Gall; a brother, Mahlon Tyler; and son-in-law, David Brown. Skip is survived by four daughters, Thena and Robert Summers, Serena Brown and Larry Sherwood, Larena and Robert Nickerson, and Darena Sellitto, all residing locally; one grandson, Scott and Lisa Summers; sisters, Patricia Grick and Jean Tiffany; a special nephew, Donnie Tyler; and several nieces and other nephews. Skip retired from IBM, Endicott after 30 years as a tool maker/mechanical engineer. While he had many hobbies, he was best known for his Christmas displays for many years at the former Hallstead Airport. His passion was flying, he flew his own airplane and later got into building remote control airplanes. Skip was a lifetime member of the Great Bend Hose Company and a lifetime board member of Coachmen Travel Trailers. He and his wife traveled extensively throughout the country. He restored many pieces of fire apparatus from horse drawn hose carts to fire trucks along with antique farm tractors. He was also a collector of musical equipment from a corn cob player to wire recorders and player pianos. He found a 60 foot windmill in Oxford, NY, disassembled, moved, and erected not once, but twice on his property. Skip refurbished the frame of a 1942 Tyler buck rake and then built the tines himself and showed it locally. He leaves behind a legacy of items restored and refurbished. Skip always had a long story to tell, “just give me a minute.” A funeral service will be held at 1:00 p.m., Friday, October 18, 2019, (Tregertha’s Birthday) at the Tuttle-Yeisley Funeral Home, Inc., Hallstead, PA. Interment will be made in New Milford Cemetery. Friends may call from 4-7 p.m. Thursday at the funeral home. Memorial contributions may take the form of Dollar General Gift Cards and sent to Tuttle-Yeisley Funeral Home, Inc. P.O. Box 936, Hallstead, PA 18822 to be donated for activities for the Barnes-Kasson SNF residents.

The family of Elton "Skip" Tyler created this Life Tributes page to make it easy to share your memories.

Send flowers to the Tyler family.