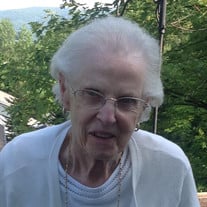 ELEANOR L. HENRY Eleanor L. Henry, 87, formerly of Kirkwood, NY passed away on July 26, 2016. She is survived by her loving husband of almost 70 years, Delmont Henry. She is also survived by five children, Barbara Henry and Debbie Shoemake, Dennis Henry, Nancy and Frank Tedeschi, James Henry, and Scott Henry and Edward Howard; five grandchildren, Brian Henry, Alicia Tedeschi, Lee Ann Peck, Deanna Tedeschi, Marybeth Henry; a great granddaughter, Ariana; a sister, Leona Hobarth and Rudy Cipolla; and several nieces and nephews. She is predeceased by two brothers and two sisters. Eleanor enjoyed watching baseball and claimed the Braves as her team. She had a vibrant personality and was the queen of one liners. Eleanor was proud of her long marriage to Delmont. She was very talented, she could play the accordion, was a skilled seamstress, and she could do whatever needed to be done. Eleanor was a loving wife and mother. She will be dearly missed by her family. The family wishes to extend their sincere appreciation to their friends at Conklin Senior Housing, Willow Point, and Senior Helpers, Barb, Isabelle, and Susan. A funeral service will be held at 11:00 a.m., Friday, July 29, 2016 in the Chapel of Vestal Hills Memorial Park, Vestal, NY, followed by the interment. Friends may call from 5-7 p.m. on Thursday at the Tuttle-Yeisley Funeral Home, Inc., Hallstead, PA.

The family of Eleanor L. Henry created this Life Tributes page to make it easy to share your memories.

Send flowers to the Henry family.