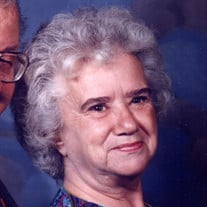 EDNA M. TAKACS Edna M. Takacs, 94, of New Milford, PA entered into rest on January 2, 2021. She was reunited with her husband of 24 years, Richard. Edna is survived by her daughters, Gayle (Joseph) Reggie and Terry (Howard) Welsh; three grandchildren, David, CJ, and Christine; four great grandchildren, Audrey, Jessica, Cesar, and Dominick; several nieces and nephews; and her companion cat, Mindy. She was also predeceased by her parents, James and Edna Tynan; and her five siblings; and her cat, Bunny. Prior to her retirement in 1984, with 33 years of faithful service she worked as a Postal Clerk. For a short time, she worked in the administration of Trinity Episcopal Church, Woodbridge, NJ. She moved to Susquehanna County in 1991. Edna enjoyed crocheting, especially Christmas decorations. She was kind and always concerned for others. “We will miss her kind and loving ways.” The family wishes to express their appreciation to Hospice of the Sacred Heart, especially Mary Pat and Julie, for their compassionate care. A private service will be held at the Tuttle-Yeisley Funeral Home, Inc., Hallstead, PA. Interment will be made on Wednesday, January 6, 2021 at noon in New Milford Cemetery. Memorial contributions in her memory may be made to Hospice of the Sacred Heart, 600 Baltimore Drive, Wilkes-Barre, PA 18702.

The family of Edna M. Takacs created this Life Tributes page to make it easy to share your memories.

Send flowers to the Takacs family.