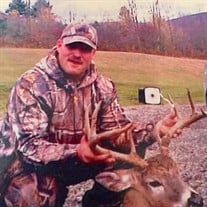 Hallstead, PA - Douglas M. Parker II, born May 4, 1970, tragically passed away in the early hours of February 6, 2021. He was the son of the late Douglas and Loretta Parker. Also, predeceased by his dearly beloved grandmother, Elma Parker. Doug is survived by his dedicated wife of twenty-three years and the love of his life Tara; his two favorite bright beams of joy, daughter Cassidy and son Gavin. His four faithful sisters, Gloria Ainey, JoAnn (James) Pomeroy, Marian Cosmello, and Dawn Parker. His caring and supportive mother-in-law, Sally Donohue, several in-laws, nieces, nephews, and cousins. Doug was a graduate of Blue Ridge High School, New Milford, PA. While in high school, Doug apprenticed under the late John Ainey of John's Sawmill, New Milford, PA. Shortly after that, Doug joined the US ARMY serving as a proud member of the Armored Vehicle Crew in South Korea. Once home, he would obtain his CDL and drive cross country for TRL. As the children were born, Doug would make informed use of his well-trained skill set and start a career with Binghamton Precast & Supply Company, where he earned his Quality Control and Lab Technician position. The knowledge and proficiency he learned as a heavy equipment operator became a foundation for his future self-employment, leading him into excavation within the stone quarry business and continued operation within the commercial truck industry. Doug enjoyed spending time with his wife and children; he was a family man. He took great pride in their accomplishments. Doug held a natural athleticism and love of baseball, golf, hunting, fishing and, all things outdoors! Oh yes, and he enjoyed the news and, he inevitably always had an opinion! The remote control was most assuredly in his possession. He lived life on his own terms. He was deeply loved and cherished. We will never forget his long-suffering with the ongoing battle that caused relentless pain brought about from a 2017 injury involving heavy equipment. The injury left him with a crushed pelvis, broken leg and, many surgeries and hospitalizations. His injuries did not define him; they became part of his story. His family will truly and deeply miss Doug for the presence he commanded in a room, the robust energy he carried, and his remarkable wit and humor. A Celebration of his life will be held at a later date after COVID restrictions have been lifted. In lieu of flowers, please consider memorial contributions to the Tuttle-Yeisley Funeral Home, Inc. P.O. Box 936, Hallstead, PA 18822 to assist with his final farewell expenses. Please leave condolences at www.tuttleyeisleyfuneralhome.com

Hallstead, PA - Douglas M. Parker II, born May 4, 1970, tragically passed away in the early hours of February 6, 2021. He was the son of the late Douglas and Loretta Parker. Also, predeceased by his dearly beloved grandmother, Elma Parker. Doug... View Obituary & Service Information

The family of Douglas M. Parker II. created this Life Tributes page to make it easy to share your memories.

Send flowers to the Parker family.