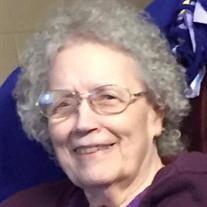 Surrounded by her devoted family, Doris Elaine Sherk Hall was welcomed home by her dear Savior on the evening of Friday, February 2, 2018. Doris was born September 11, 1934, in Mishawaka, Indiana. As the oldest in a family of six children, Doris was known to be an incredible help to her parents in caring for her younger siblings in the post-depression years. A 1952 graduate of Mishawaka High School, Doris began her career in a clerical role at the Ball-Band Company in South Bend. Doris met her Prince Charming, Gerald O. Hall, while serving as the Maid of Honor at the wedding of her best friend, Betty Gay. In the years of their courtship, Doris traveled by train from northern Indiana to visit her beloved in Northeast Pennsylvania, where she met her soon-to-be family members, the dad, brothers, aunts and uncles, and friends of Gerald (Jerry). Jerry and Doris married at the Grace Chapel in Mishawaka, Indiana, on May 14, 1955. In the years following, Doris and Jerry began a family when their first born, Janice Rose arrived, followed by Delinda Sue and Dwight Monroe. Over the years in which Doris focused on being a wife and mother, she also continued and refined her skills as a cook and seamstress. Doris’ career as an accomplished seamstress brought much joy to her life and that of her family, as well as the clients who sought her out for her excellence as a seamstress/tailor. Doris and Jerry moved from northern Indiana to Longview, Texas, in 1968 for Jerry to begin his study of Aviation Maintenance Technology at LeTourneau College, after which East Texas became their lifetime home. Doris enjoyed a personal relationship with her Lord Jesus and over the years she faithfully served Him in many capacities at Pine Crest Bible Church in Longview. These included leading the young Cubbies in the Awana program as well as serving as a nursery volunteer. She was usually wearing her favorite color, purple! She was a faithful friend to many. She adored her children and their spouses, and as her family grew she supported them in many ways, including by caring for her grandchildren as babies and toddlers to assist her grown children as they began to establish careers. Doris also enjoyed her work for fifteen years as a transcript clerk in the Registrar’s office at LeTourneau University. Over her lifetime, Doris and Jerry welcomed and graciously hosted countless missionaries and families into their home to offer a warm meal and conversation – many wonderful memories were made around the kitchen table. In her later years, Doris boldly lived with limited vision by the impact of macular degeneration and faithfully participated in the East Texas Macular Degeneration support group. Doris is survived by her beloved husband of 62 years, Gerald O. Hall. She is also survived by her children: Janice (Ray) Laurent of Panola, Texas; Dr. Delinda Hall of Longview, Texas; and Dwight (Angela) Hall of Longview, Texas. Doris is survived by her sisters: Pat Weaver of Nappanee, Indiana; Sandra Edwards and Marsha (Uri) Castillo of South Bend, Indiana; and brothers, Jerry (Carol) Sherk of Liberty City, Texas; and Tom (Eileen) Sherk of Bremen, Indiana. Her best friend and sister-in-law, Betty Gay Hall, and her husband, Dr. Donald Hall, of Sebring, Florida; and her brother-in-law and his wife, David and Geraldine Hall of Susquehanna, Pennsylvania. Her grandchildren are: Monica (Chris) Chmiel; Ray “Trey” (Jennifer) Laurent III; Lauren (Doyle) Laurent-Parker; Savannah (Brandon) Henderson; Drs. Jacob (Kelly) Hall; Sarah (Jack) Buttram; Jesse Hall; and Wendi Medley. A multitude of great-grandchildren adored their Grandma Doris including: Melody, Tyler, and Kyle Chmiel; Elijah, Ethan, Josiah, Jeremiah, and Awesome Laurent; Cain Parker; Kaden, Sophia, Lillian, Bella, and Bentley Henderson; Lindsey and Katelyn Hall; and Henry and Lucienne Buttram. Doris is also survived by many nieces, nephews, cousins, and friends who enjoyed her loving and generous spirit and beautiful smile. Doris was preceded in death by her parents, Howard and Georgia Sherk, and brother, Robert Owen Sherk. The family offers heartfelt thanks to the staff of Panola Nursing & Rehabilitation, and Heartsway Hospice, both located in Carthage, Texas, for the compassionate and professional care of Mrs. Doris over the past year. In lieu of flowers, the family suggests memorials be made to the Awana ministry or Heartsway Hospice of Carthage. The Awana ministry’s purpose is to equip leaders to reach kids with the gospel of Christ and engage them in long-term discipleship. Interment and a graveside service will take place on May 14, 2018 at Maple Ridge Cemetery, Susquehanna, PA, under the direction of Tuttle-Yiesley Funeral Home, Hallstead, PA.

Surrounded by her devoted family, Doris Elaine Sherk Hall was welcomed home by her dear Savior on the evening of Friday, February 2, 2018. Doris was born September 11, 1934, in Mishawaka, Indiana. As the oldest in a family of six children, Doris... View Obituary & Service Information

The family of Doris Elaine Hall created this Life Tributes page to make it easy to share your memories.

Surrounded by her devoted family, Doris Elaine Sherk Hall was...