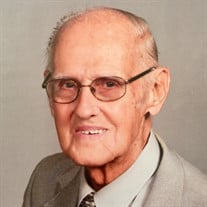 DONALD C. MAJOR Donald C. Major, 89, of Conklin, NY, passed away peacefully on February 21, 2018. He is survived by his loving wife of 69 years, Catherine Major; a son, Stephen (Deborah) Major, Susquehanna, PA; daughters, Marlene (Dale) Osman, Shirley (Gary) Wills, and Susan (Glen) Major, all of Binghamton, NY; eleven grandchildren; 16 babies who call him great; and many nieces and nephews. A man of steadfast faith, Don was a member of First Baptist Church in Hallstead, PA for 65 years. He enjoyed anything to do with nature, (hunting, fishing, and hiking) and was often found puttering around in his meticulously kept yard and home. Don worked as a tower operator and then a dispatcher for the Erie Lackawanna Railroad for 23 years, the last in a lineage of railroad men. He then owned and operated the Conklin Carwash for many years. He had a quiet disposition, quick wit, and impeccable ethical standards. True to his nature, he died at home without complaint or distress. He hoped to experience spring one more time and his family is grateful that his last two days were spent with the windows open to unseasonably spring-like weather. Though we know that he has gone on to greener pastures, reunited with dear ones who’ve gone before him, we can’t help but miss him until the day that we cross to the other side and once again hold him in our arms. We would like to thank the skillful, tenderhearted staff of Lourdes HOSPICE, who cared so gently for both Don and his family. They helped make it possible for the family to care for him at home. A funeral service will be held at 3:00 p.m., Monday, February 26, 2018 at the First Baptist Church, Hallstead, PA. Spring interment will be made in the Gibson Cemetery. Friends may call from 2-4 and 7-9 Sunday at the Tuttle-Yeisley Funeral Home, Inc., Hallstead, PA and from 2-3 p.m., at the church, prior to the service on Monday. In lieu of flowers, the family requests memorial contributions to be made to either Lourdes HOSPICE, 169 Riverside Drive, Binghamton, NY 13905 or online at http://www.lourdes.com/about-us/foundation/donate-online or to the First Baptist Church, 96 Pine Street, Hallstead, PA 18822.

The family of Donald C. Major created this Life Tributes page to make it easy to share your memories.

Send flowers to the Major family.