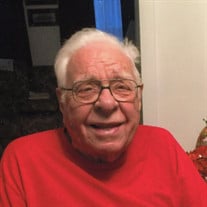 CLARENCE H. “HOWEY” HOLLAND III. Clarence H. Holland III, 89, of Great Bend, PA died on Wednesday, September 16, 2020 with his loving wife of 33 years, Trudy, by his side, after a long fight with heart issues and COPD. Besides Trudy, Howey is also survived by his daughter, Marisa L. (Eric) Janoske-Warren; step daughters, Becki Abbott and Jeannette Rogers; step sons, Kenny (Gail) Smith and Randy (Debbie) Smith; a sister, Dorothy (Ralph) Verrastro; son-in-law, Bill (Mary Ann) Jennings; grandchildren, Ryan Jennings, Dylan Janoske, Dustin Palmer, Ryan Rogers, Amy (Ryan) Millard, Peter (Savina) Smith, and Robert Burrnett; numerous great grandchildren, great great grandchildren, nieces, nephews, and extended family members. He was predeceased by his daughters, Linda Jennings and Wendy Holland; his mother, Irene Olin; his father, Clarence H. Holland II; his brother, Duane Holland; a sister, Linda Holland-Berean; and a sister-in-law, Anne Holland. Howey proudly served in the US Air Force and would “talk” for hours about “nothing” that happened at the base where he was stationed in New Mexico. Howey started at Singer-Link as a draftsman, right out of college, working his way up to Engineer and Manager, retiring after 32 years with the company. His professional accomplishments include being a part of the team that designed the simulator for astronaut training for the NASA Space Shuttle. Howey was the best balance of tough and tender, sweet and salty, “tell it like it is” kind of guy. You always knew where you stood with him. He will be thought of often and missed just as much. At his request, there will be no public services. Should friends so desire, expressions of sympathy may be made to Hospice of the Sacred Heart, 600 Baltimore Drive, Wilkes-Barre, PA 18702 or American Heart Association/American Stroke Association, P.O. Box 417005, Boston, MA 02241-7005.

The family of Clarence "Howey" H. Holland III created this Life Tributes page to make it easy to share your memories.

Send flowers to the Holland family.