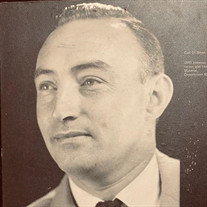 CARL “BUTCH” SILVER  Carl Silver, 89, of Hallstead, PA went to be with his Lord and Savior on January 22, 2020.  He is survived by his faithful wife of 69 years, Sarah Jane; four sons, David (Gail), Dennis, Dwight (Mimie), and Dean(Denise) Silver; eight grandchildren, David L., Daniel, Duanne, Joshua, Jarrod,Luke, Carl “Rick”, and Minette; 11 great-grandchildren; a brother, Jonathan (Sylvia); a brother-in-law, John (Kay) Nemire; and several nieces and nephews,including Peggy Walworth and Gloria Brazill. He was predeceased by his two sisters, Norma (Clyde) Payne and Linda (Ray) Tingley. Prior to his retirement, Carl worked for IBM in their Shipping Division for more than 30 years.  He had a strong work ethic, from the age of 13, that he passed on to his sons and grandchildren.  Carl’s faith was strengthened throughout his life.  He went to Baptist Bible Seminary and Practical Bible Training School. Carl never felt called to be a full-time Pastor, however, he never refused an opportunity to preach and share the Gospel.  He played the violin, sang, and served in many capacities at First Baptist Church, Hallstead, in his younger years.  During his working years, he also ministered at three churches in Susquehanna County. After he retired from IBM, he served for over 30 years at Park Avenue Baptist Church, Binghamton, NY.  He also worked at the Harford Fair for many years, was involved in real estate, spent winters in Florida, and hadnumerous side endeavors.  Carl took an interest in the lives of people with whom he came into contact.  He had a strong will, tempered with kindness and compassion.  Carl’s family and friends were very important to him and he cherished time spent with them. He will be dearly missed. A special thanks is extended to the entire staff of Barnes-Kasson Skilled Nursing Facility for the compassionate care that Carl received during his stay with them. A funeral service will be held at 11:00 a.m., Wednesday, January 29, 2020 at the First Baptist Church, Hallstead,PA.  Interment will be made in Rose Hill Cemetery.  Friends may call from 4-7 p.m. Tuesday at theTuttle-Yeisley Funeral Home, Inc., Hallstead, PA and from 10-11 a.m. at the church, prior to the service.  In lieu of flowers, memorial contributions may be made to your local Baptist church.

The family of Carl Silver created this Life Tributes page to make it easy to share your memories.

Send flowers to the Silver family.