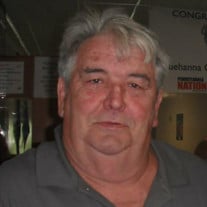 CARL D. LARSEN Carl D. Larsen, 77, of Susquehanna, PA entered into rest on October 15, 2021. He is survived by his loving wife of 53 years, JoAnn; his children, Frank (Justine) Larsen, Jason (Barbara) Larsen, April Jennings, and Sydney Larsen; six grandchildren, Tami, Bob, Ryan, Lauren, Matthew, and Bailee; three great grandchildren, Camdyn, Zayn, and Alyana; a sister, Marla Graves; mother-in-law, Mary Skowronski; in-laws, Fran Gelineau and David Skowronski; several nieces and nephews; and a very close friend, Harold McGee. He was predeceased by a sister, Ruth Gerstenkorn. Carl was a true patriot and signed up with the Army, even though he was too young. He joined the Navy when he reached the acceptable age. He spent his career with the Navy, retiring in 1980 as a Chief Petty Officer and came to Susquehanna County. Carl completed his training with the NJ state police and served in Colts Neck, NJ. He worked as a police officer in Susquehanna, became the Street Commissioner. He then started a siding and roofing business and finally finished his career with Mirabito, repairing and installing furnaces. Carl was always mindful of expenses and found ways to fix anything at the “Nuthill Factory.” Carl had quite a sense of humor and loved his animals. He was a great husband, father, and grandfather and will be deeply missed by his family and friends. Friends may call from 4-7 p.m., Wednesday, October 20, 2021 at the Tuttle-Yeisley Funeral Home, Inc. with military honors at 7:00 p.m.

The family of Carl D. Larsen created this Life Tributes page to make it easy to share your memories.

Send flowers to the Larsen family.