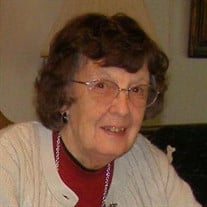 Betty L. Hall, age 89, Sebring, Fla., died at home, surrounded by family, on Jan. 4, 2019. She was born in South Bend, Ind. to the late Harold and Ada Gay of Mishawaka, Indiana. Betty was led to the Lord by her mother and grew up in a nurturing Christian family. She graduated from John Adams High School in South Bend in 1948 and later attended the Practical Bible Training School, Johnson City, N.Y. She served in Nigeria, Ghana, and a short term in Ethiopia under SIM. She was a member of Southside Baptist Church, Sebring, and a longtime member of the Conklin Center Baptist Church, Conklin, N. Y., where she was active in the Ladies Missionary Society and served on the missions committee. She was a bookkeeper and office manager, skills she used extensively throughout her life. In Nigeria she served as Manager of the Igbaja Bible College Correspondence School and, later as College and Seminary Librarian. Later, in Ghana she served in the African Challenge magazine office, and during their last term in Africa she assisted the Nigeria Field Treasurer at SIM HQ in Jos, Nigeria. In the U.S.A., she was bookkeeper and office manager at Bethel Brethren School, Osceola, Ind., Faith Heritage Christian School, Syracuse, N. Y., Beth Eden Baptist School, Denver, Col., Office of Continuing Education for American Nurses, Columbia, S. C. and Student Financial Aid Officer at Davis College, Johnson City, N. Y. In her retirement she continued to serve the Lord by assisting at the SIM Archives both on location and from home. She was a loving wife and mother, a wise counselor, and a great source of encouragement to family and friends. Among her many gifts was hospitality. Betty is survived by her husband of 66 years, Don, and by Dean and Lanni Hall, Hemet, Calif.; John and Nancy DeValve, SIM, Niamey, Niger; Duane and Natalie Wilkins, Sebring, Fla.; eight grandchildren: Jason Hall, Robert Hall, Nathan and Alesha Wilkins Vines, Nathan and Erika Wilkins Gould, Jeremiah and Heather Wilkins, Daniel and Kelly DeValve, Theo and Suzanne DeValve Hines, and Jake Nie Hall. Also, two brothers and a sister-in-law: David W. and Gerri Hall, Susquehanna, Pa., and Gerald O. Hall, Carthage, Texas; nine great- grandchildren, and several nephews and nieces. She was preceded in death by her son, Daniel G. Hall. Memorial services will be conducted at the SIM Chapel, Sebring, at 10:30 on Jan. 12, 2019. Interment will be in the spring at Maple Ridge Cemetery, Susquehanna, PA.

Betty L. Hall, age 89, Sebring, Fla., died at home, surrounded by family, on Jan. 4, 2019. She was born in South Bend, Ind. to the late Harold and Ada Gay of Mishawaka, Indiana. Betty was led to the Lord by her mother and grew up in a nurturing... View Obituary & Service Information

The family of Betty L. Hall created this Life Tributes page to make it easy to share your memories.