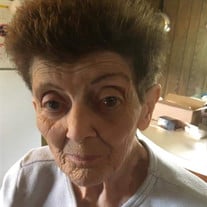 BETTY J. BUTTON Betty J. (Van Loan, Wooster) Button, 87, of Hallstead, PA died on February 12, 2020. She is the daughter of the late Franklin and Doris (Eldred) Van Loan. She was also predeceased by infant brothers, Franklin in 1937 and Lawrence... View Obituary & Service Information

The family of Betty Button created this Life Tributes page to make it easy to share your memories.

Send flowers to the Button family.