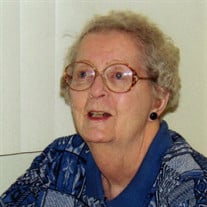 Beatrice Blake — Betty — of Kirkwood, died in Zephyrhills, Florida on Wednesday, February 22, 2017, at the age of 88. She passed away surrounded by her loving husband of 68 years, Glenn (Bob) Blake and their four children: Ernest, Glenda, James, and Thomas. Betty – or “Bea” — was the third daughter of Ernest and Ruth; she was predeceased by her parents, her sisters, Alice and Edith, and her brothers, Erich and Ernest. She is survived by her youngest brother, Richard; two granddaughters, Rebecca and Sara; two grandsons, Michael and Benjamin; and one great-grandson, Henry. Betty married Bob Blake — the love of her life — at her parents' home in Deposit. Born in a farmhouse, Betty started first grade in a one-room schoolhouse at the age of 4. After her parents moved, Betty began third grade in a different one-room schoolhouse, walking one mile from home and back each day. She was a graduate of Deposit Central High School, attended Ridley Secretarial School with her sister, then, the first incarnation of SUNY Broome Community College as a chemical technology major, and decades later earned an Associate’s Degree in Library Science from Empire College. As a teenager, Betty was an aspiring poet, who particularly admired the poetry of Ogden Nash, whose every poem she knew. Some of her poems, like his, were humorous, while others were serious and sensitive. Although she submitted her work to numerous magazines, her poems were never published. As a young woman, she worked briefly at the Deposit Courier and at Scott's Oquaga Lake House. At the time of her marriage, she was employed as a research lab assistant at GAF in Binghamton. After leaving the workforce for several years to raise a family, in 1970 she started a new career as a library acquisitions clerk at Broome Community College, retiring in 1991 as a Senior Library Clerk. She was a prolific writer, a master organizer, and an early computer user and enthusiast. Betty was a talented singer and musician, who for many years sang in, and, from 1979 to 1995, directed, the senior and junior choirs of the First United Methodist Church of Kirkwood, where she remained an active member until her death. She served as the church historian and communications steward for many years. She also served in similar capacities in the Oneonta District and Wyoming Annual Conference of the United Methodist Church. Betty was an avid birder, and loved to travel with Bob. Together, they saw five World's Fairs. They traveled to the Holy Land, to the Virgin Islands, to Mexico, across Canada by train and to many parts of the continental United States. Betty was a skilled seamstress, who developed interests in embroidery, needlepoint and paper cutting, making greeting cards by hand for her friends and family. Betty was brilliant, witty, and creative; loving, devoted and caring. She was loved in return by many, and always saw the best and human side of everyone. She will be greatly missed. A funeral service will be held at 11:00 am Tuesday, February 28th at the First United Methodist Church on Main Street in Kirkwood. The family will greet friends from 9:00 am to 11:00. Betty will be buried in the Kirkwood Cemetery. In lieu of flowers, donations may be made to the First United Methodist Church, PO Box 394, Kirkwood, NY 13795.

Beatrice Blake &#8212; Betty &#8212; of Kirkwood, died in Zephyrhills, Florida on Wednesday, February 22, 2017, at the age of 88. She passed away surrounded by her loving husband of 68 years, Glenn (Bob) Blake and their four children: Ernest,... View Obituary & Service Information

The family of Beatrice K. Blake created this Life Tributes page to make it easy to share your memories.

Send flowers to the Blake family.